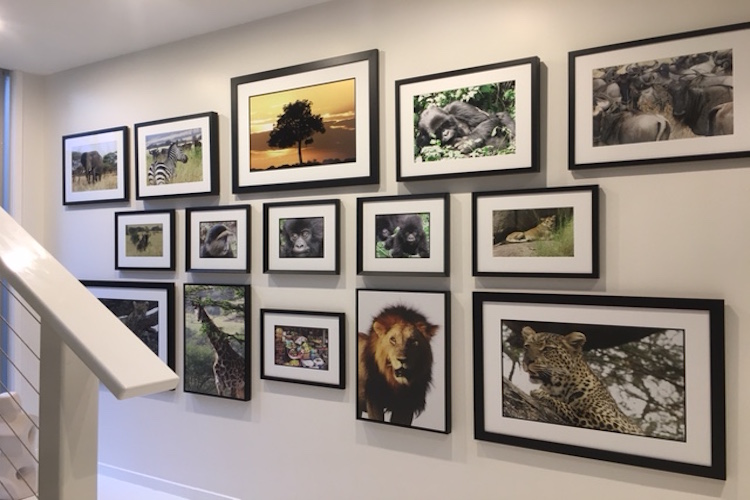 How exciting and rewarding was it to create this collection of photos for Jeanette’s African Gallery, now hanging in her entrance lobby in Casuarina.  It was such a pleasure to hear Jeanette’s stories of adventure and create her African photo wall with her.

A photo wall is a fabulous way to relive memories of special events, holidays, family occasions, baby and children photos and even your favourite landscape images.

I’ve done a few now and every one is unique, exciting and rewarding.  Read on to relive her African adventure story in her own words.  It’s fascinating and it makes me want to go to Africa.

Jeanette’s Story as told by her……..From around the Framing Table.

My trip to Africa was eighteen months in the planning.  My cousin and his mate worked in Africa for three years after completing their engineering degree in the early 70’s.  They decided to put together their tailor- made tour of Africa.  They contacted a travel agent in Sydney who specialised in custom made tours.  After much deliberation, they came up with the trip of a lifetime. There were only eight of us in the group. When my cousin Bob told me about the trip he was planning, I was so envious and then he told me, there is one spot left.  So there I was…on my way to Africa.

We flew from Sydney to Perth to Johannesburg to Kigali, the capital of Rwanada.  Kigali was totally different to what I imagined as it was so clean, no graffiti and no rubbish on the street. We then travelled to the Virunga Mountains.  We hiked for a day into the Mountains to find the Silverback Gorilla family.  As they are endangered, only 8 people per day are able to visit a family.  We had guides who led us through the bush for two hours before we found a family of about twenty gorillas, led by a magnificent Silverback.  They were having a rest in a clearing and we joined their party.  We had strict instructions as to what to do when approaching.  I found them totally overwhelming as they are so human- like and so peaceful. an unbelievable experience. We were only able to spend one hour with them.

A three week old baby gorilla, (which is one of my favourite photos, Jen popped into the second row of my collage), was being watched very closely by his older brother. The baby is fascinated with my shoe laces and every time he gets close to my shoe, his brother pulls him back. When the hour is almost up, our guide tells us quietly that we only have two more minutes.  The largest Silverback seems like he has a time watch.  He gets up, stretches, beats his chest and runs off into the bush and the others follow.

In my collection, I have one of the Silverback, and two of the baby.  Jen recaptured the Silverback’s magnificence by placing this image in a larger box frame.  He sits in the top row holding court and overlooking to the other animals in the collage.

The next day, another hike into the area of the Virunga mountains to discover the Golden Monkeys.  These are even more endangered than the Silverbacks. They are here in the hundreds and are much more difficult to photograph on my old Canon 1300D,  as they are moving so quickly.

From Kigali we caught a small plane via Mwanza to Kogatende airstrip in Serengeti.  Most of my photos are taken in the northern part of Serengeti when we went on a Game Safari.

We witnessed the gathering of the herds of wilderbeast on the banks of the Masai Mara and the experience of seeing nearly every other African species was spectacular.  We stayed in a ‘tent’ camp on the edge of the Mara River and went to sleep with the sound of the wilderbeast.

We visited Ngorongoro Crater which hosts nearly every African species, then onto the Tarangire National Park where my favourite of favourites, the photos of the leopards were taken.

The trip also took me to Zanzibar, Okavango Delta, Zambia, Livingstone and Victoria Falls.  We finished our trip in Capetown where I purchased a large canvas painting of a leopard.

On my return to Casuarina, I needed a good framer.  Coastal Framing and Design was recommended by a friend.  Good Choice. The leopard hangs in my stair well, and this was when I decided to make my entrance hall below it, my African Wall Gallery.

Jen listened to my stories, designed my wall with care and imagination. She has made my average photos into a work of art.  The framing is superbly crafted and I’m so happy with the finished job. I can look at the wall of photos and relive every moment of my time in Africa. My theory is proven.  If you take enough photos, some of them have to turn out alright!

Thanks Jeanette for sharing this wonderful adventure.  I look forward to the next story from Around the Framing Table.