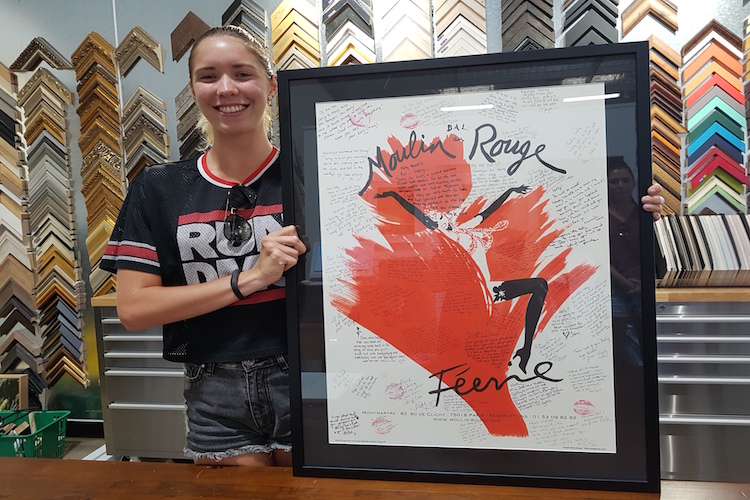 Can Can anyone?  Learning the ‘Can Can’, surviving the Paris street bombing, living away from home and learning the French language was all part of the journey for our Coastal Framing customer, Holly.

I did a double take when I rolled Holly’s signed poster out on the Framing Table.  Moulin Rouge?  Sydney?  No.  Paris of course.  This vivacious young lady had just returned from Paris for a home visit between jobs as a dancer at the real, totally authentic and exciting, Moulin Rouge.

A farewell gift from her dancing colleagues in Paris, Holly was having it framed up so memories could be fresh and relived.  I had so many questions to ask Holly as we designed the simple frame that she agreed to email me her story.

So read on, imagine the colour, the music, the shapely long legs and the stage as you share her experience and indulge yourself in a real life story of a young, local girl, her travel, working life and adventure.

My first impression of Paris wasn’t a nice one. I didn’t start to fall in love with the city until I learnt my way around and found the shops I would like and use. I didn’t get use to that until after the rehearsal period. Moulin Rouge on the other hand I loved. The building was so much bigger then I thought… actually everything in Paris was so much bigger, especially the Eiffel Tower, which was by far my favourite place. I watched the show for the first time on my 2nd day of rehearsal and I fell in love instantly.

The first month or so was just a giant blur. Everything went so quickly and before I knew it, I was performing with the other 40 people in the cast. I was the youngest by about 3 years. There were dancers there old enough to be my parents. That was strange. I was very lucky in the fact that about 45% of the cast were Australian so I was surrounded by people who were also so far away from home and understood the struggles. It does take a little while to settle in with the cast. Some people have been in the show for 20 years so they just get in a do their job. But its just like a huge family. Every birthday they throw a little party and all holidays are celebrated to the fullest even though most of the time you are working.

I have been training hard core since I was 3 years old, In all styles and all around Australia. So I was so ready for this adventure. It was the next step.  It made sense. Performing on stage feels like home. So just moving onto the Moulin stage felt comfortable and a little surreal.

A typical day for me was waking up around 12pm. We wouldn’t finish our shows till 2am so that’s why our days start then haha, no judging. If we didn’t have rehearsals that day I would do the daily chores like anyone would- like grocery shopping, cleaning and just hanging out with friends. At 7:30pm I would go into work and begin my makeup and warm up. At 9pm the show would start. At 11pm the 2nd show would start. We would have around a 20min break in between while the audiences swapped over. Sometimes my friends and I, after we finished, would go out for drinks or a late snack. We needed to wind down, always high on adrenaline at 2am. And Paris is a night life city which was lucky for us with our schedule. Then would have a nice long sleep to get ready and do it all over again.

Learning the Can Can and all the technique has been the hardest thing stamina wise I have done in my career so far. Every kick and jump spilt is so precise and the movement is so fast. Also having a group of 14 girls staying together with correct timing requires lots of rehearsals. Your body obviously gets tired and sore and things snap and break but its just part of the job. Most professionals have been working at this their entire lives so its nothing new to us. Just have to keep your body strong and make sure you look after yourself. That alone is a job in itself.

There are over 30 different costume changes among us during each show. Each costume is hand made by dressers that work around the clock and are worth a fortune. Most are covered in real Swarovski crystals. Also all the hair/head pieces and big feathers we wear on our backs for most numbers which weigh around 5kgs each.

The hardest thing for me living in Paris was the language. Trying to sort out apartments, bills, banking, tax etc., all in a foreign country was hard. Let alone doing it for the first time ever in my life. For the first year I lived on my own and in my 2nd year I moved in with one of the Male dancers in the show. Also the winter time is just miserable.

The best thing about living in Paris besides having my dream job and being surrounded by amazing people and friends I have for life, is that everything in Europe is so close so I got to see a lot of different countries as well. I loved travelling and having little holidays with friends.

This didn’t happen often but the greatest nights at work were when things went wrong. When music stuffs up and everyone is on stage not knowing what to do, when people don’t make it on stage in time and everyone is in the wrong positions, When the lighting goes all wrong. Little things like that make it very entertaining for the dancers on stage. Doing the same show two times a night does get a little boring so we like to play little games onstage just to keep it interesting and for a laugh. But the best fun always happens back stage. I always say it should be a reality TV show. What happens in the dressings rooms is always so entertaining with millions of pranks and really bad singing?

Next I am travelling on a cruise ship with my Sister, ready to dance our way around the ocean.

I’m looking forward to this and will give you an update at a later stage.