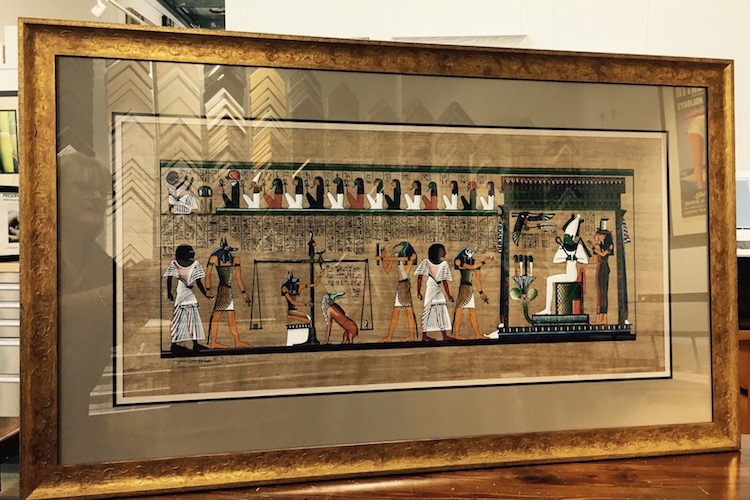 FROM AROUND THE FRAMING TABLE

I’ve always been fascinated by papyrus which is an ancient version of what we know as paper.  It’s made form the pith of the papyrus plant, Cyprus Papyrus and is first known to have been used in Ancient Egypt. It’s a wetland plant that was once abundant in the Nile Delta of Egypt.  The Ancient Egyptians used papyrus as a writing material as well as in the construction of other artifacts such as reed boats, mats, rope, sandals and baskets.

Due to what’s been happening in the Middle East over the last few years, framing papyrus has been few and far between.  However, last week I was excited to have the most exquisite piece brought in by Carmel Glenane, a local spiritual, tour guide leader who takes groups of people into Egypt so they can experience this ancient civilisation and hopefully, bring back their memories in a beautiful papyrus to frame.  Carmel’s business is ‘Atlantis Rising Healing Centre” in Coolangatta, where you can experience her work, along with viewing other papyrus framed by us in previous years.

I welcomed the opportunity to ask Carmel to explain to me the significance of the art work, entitled “The Last Judgment” and here is Carmel’s explanation.

“The Last Judgment” is considered the most important belief in Ancient Egypt. It follows the journey of the deceased, who is to be finally judged by the great God Osiris.

Ancient Egyptians believed in the sacred “Law of Maat” where the deceased weight of his/her heart was considered the final verdict of how an Egyptian life was lived.

The heart is the oracle and its measurements carefully and precisely weighed. Paradise was available if the heart was as “light as a feather,” (you can see the feather on the scales).

For the ancient Egyptians, living a balanced life was essential to remind them to keep their hearts “feather light” for the weighing.

I feel today we must remember what the ancients teach us. The mind wasn’t weighed, only the heart.

Feed your heart love, every day. Remind yourself to be truthful, and say “Heart I Love You”.

Read more from Carmel about her enlightening, spiritual tours and what she can offer you with your own Egyptian journey…In her own words…..

Blessings Jen and thank you for inviting me to share the story of the Ancient Egyptian Papyrus.    Here is more to the story.

Witnessing exquisite Egyptian artwork on papyrus as it demonstrates the extraordinary precision in nature, architecture, every day and Temple life of the Ancient Egyptians, becomes reborn again as the detailed, hand painted papyrus is carefully rolled and brought home from its land of birth.

I am a spiritual tour leader, and have lead fourteen journey with groups to Egypt next since 2001.

I am grateful to draw on the journey and relive my transformative experiences when Jen patiently and lovingly delves into her treasure trove of glorious frames and mouldings, breathing new life into the exquisite artwork.

We replicate the detailed, geometrically perfect artwork as our papyrus reveals even more magic when hung in our homes, and in my case, my business.

Immortal art deserves the best, as it reflects a civilisation which creates peace, order, and balance in all of life.  This philosophy is called the Law of Maat.  Meaning a system of justice bringing order and harmony in all of life.

Ancient Egyptian art was an honoured craft. Highly trained scribes, Priestesses and Priests gave instructions to artisans to relive the vision of a civilisation, which was known as the mightiest in the ancient world.

When you gaze lovingly on a Temple masterpiece papyrus, its meaning can effect a profound shift in consciousness.  For myself, just reflecting on the symmetry, the balance between the masculine and feminine, brings me peace. There is a feeling of awe, tranquility and belief that a society was able to create a vision of such “Justice”.

Our relationship with art is personal as it reflects our heart’s message to us through the visual medium.

Reflecting on artwork in a person’s environment, lovingly framed, enables you to get to know the person intimately, and how they bring to their world what is important to them. You understand their world and make the energetic shift to a shared consciousness.

Earthing our art with inspirational framing brings joy not only to ourselves, but others.

In November, as I prepare for my next tour taking groups into the mysteries of this ancient civilisation, I know the power of witnessing this civilization. It reveals itself again and again bringing the miracle of the mysteries alive in my heart, and in the hearts of those who travel with me.

Feel the surrender as you relive the power of ancient Egypt in her transformative healing artwork.

Join me in November to see and feel this ancient civilisation.