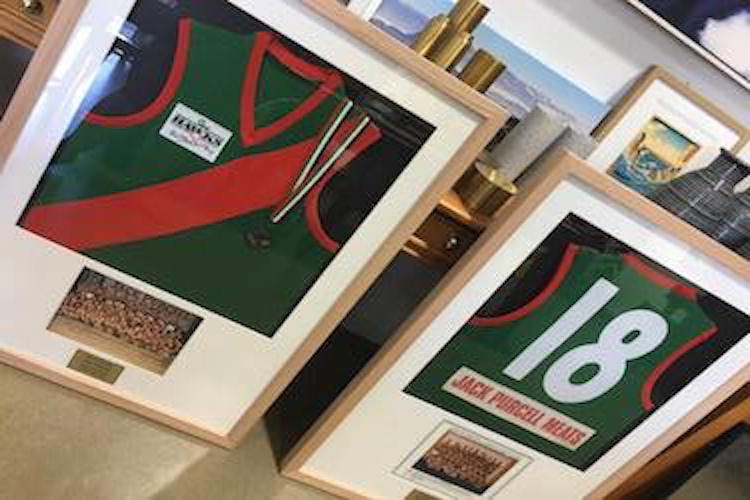 NUMBERS ARE NOT JUST NUMBERS

WITH another winter season of football coming to a close, I can feel your excitement as you grab your favourite jersey and race along to the Picture Framer to get it framed. You’re about to preserve the odour, the colour, the sweat and tears of the games, and the NUMBER forever!!

So how important is the number on the back of a football jersey, a basketball jumper or cricket jumper? Once I asked the question, I found myself researching the history of the jersey number.  Here’s a summary from my internet readings.

If you have a personal number on your sporting jersey, email me your story to add to the blog.

The most famous number in sport is the 23 worn by the greatest NBA player of all time, Michael Jordan who played for the Chicago Bulls.  Both Jordan and his older brother’s favourite number was 45. Jordan said that as his brother was older, he had seniority and the option to wear 45 so

Other incredibly talented sportsmen to wear the number 23 are Shane Warne, Lance Franklin and David Beckham.

In Women’s AFL the number 23 for the Western Bulldogs goes to Lauren Moorecroft.

Reliable and a great team player, Moorecroft is the quintessential hard-nosed, hard running key defender. Strong in the air, great in one-on-one contests and offering wonderful support to teammates.

Why did I choose the Western Bulldogs?  Its my 91-year-old mother, Emma’s, magic team. Being a Footscray girl from way back my mother is taking interest in the women’s AFL. In keeping with the successful number 23, Emma says that Moorecroft should have a Stella career in AFL.

SO WHO INVENTED THE SPORT’S NUMBERS?

According to the International Federation of Football, History and Statistics, the origins of sports numbers were invented in AUSTRALIA.  They can be tracked back to an Australian Rules game in Sydney, 1911. Here’s the story and for more information, click the link.

WHEN the Victorian Football League got under way back in 1897, the players did not wear numbers on their jerseys.

Strangely, jumper numbers were not ushered into the VFL until midway through the 1911 finals series.

These days, AFL numbers are often passed on to the new star of the club or the sons of former players. Gary Ablett Jr opted not to wear the number 5 of his legendary father but rather chose his own identity.

This year was the first year that all AFL teams had Indigenous jerseys designed for the Sir Doug Nicholls Indigenous Round played in May, 2017.

There is no doubt that sporting colours, designs and numbers are all becoming an integral aspect of the fashion industry, if not for appearance, identity, branding but corporate and industry gains. The jersey designs were amazing and when collectively viewed, stirred the soul.

SYDNEY superstar Lance Franklin was one of 10 players who changed his famous number for this game.

Franklin abandoned his usual No.23 Guernsey for No.67 to commemorate the year of the referendum that ensured indigenous Australians would be counted in the census and allowed the federal government to make laws for them.

No.67 also was worn by Brisbane Lion Cedric Cox, Collingwood’s Daniel Wells, Gold Coast co-captain Steven May, Giant Zac Williams, Hawthorn’s Shaun Burgoyne and Richmond’s Shane Edwards, who wore the number in the center piece of Indigenous Round, the Dreamtime at the ‘G match.

Other players, both indigenous and non-indigenous, wore No.50 to honour the 50th anniversary of the referendum.

In recent times, we have seen the power of numbers in a collective voice as the AFL players choose those numbers of political and cultural significance. As these are worn proudly on the backs of their jerseys, we discover the quest of our modern day sports men and women as they seek to celebrate history, make their voice heard and create new stories for future generations.

In the NRL, numbers are straight forward, representing a player’s position.

On the field, players are divided into forwards and backs.  The backs are 1-7 and the forwards 8 – 13.

The laws of the game recognise standardised numbering of positions. The starting side normally wear the numbers corresponding to their positions, only changing in the case of substitutions and position shifts during the game. In some competitions, such as Super League, players receive a squad number to use all season, no matter what positions they play in.

EELS change the numbers – A slight deviation from tradition.

Back in 2007, Each player to have worn the Blue and Gold jersey was awarded a unique player number as part of the Parramatta Rugby League Club’s 60th anniversary celebrations. Each year, the Eels continue that tradition whenever a player makes his debut.

I read that on 5th May, 2010 The NRL was to consider a proposal to allow players to have their own individual numbers on the backs of their jerseys.

As far as I know, this hasn’t happened as yet and the NRL retain their traditional method of allocating player numbers.

NUMBERS ARE NOT JUST NUMBERS IN NBA BASKETBALL

The great NBA players have come to be identified by their jersey number. For instance, we all see No. 33 when we reminisce about Larry Bird or the No. 32 when we think about Magic Johnson.

We also all may recall how Michael Jordan made No. 23 a mystical number.

Many reveal that the number they wear goes back to their first team. Others honor a relative or basketball idol with the number they wear. And some have their own esoteric reasons – birthdays, a family event, special verse, prose, book page number, lucky number….

Kyrie Irving apparently picked number 2 out of a hat. A ‘random number with no significance” he said.

But for others, the numbers they wear might hold a great deal of meaning.

In basketball, famous player, WADE chose his number for this reason:

“The No. 3 is a significant for Wade, and the number has become a common thread in his life. Wade, a devoted Christian, picked his jersey number in honor of the ‘Holy Trinity.'”

No matter the reason behind the number, quite a few No. 3s have excelled in the NBA.

In Soccer, the reason behind the printing of jersey numbers is simple: it helps referees and fans distinguish players on the pitch.  Numbered shirts were first worn in professional football by English clubs Arsenal and Sheffield Wednesday in August 1928. At that time, starting players were wearing numbers 1 to 11 according to their positions on the field, and higher numbers for substitutes.

Fixed numbers assigned to each player, called squad numbers, for the duration of a competition was introduced first during the 1954 World Cup, 50 years later. The Football Association (governing body of English football) abandoned the required use of 1-11 for the starters and squad numbers became the rules during the 1993-94 English Premier League season. Nowadays most of the top football leagues in the world adopted the squad numbers system.

Because the assignment of jersey numbers by football position is a tradition and not a rule, teams are free to give numbers to their players as they want.

Assignment by alphabetical order:  During 3 consecutive World Cups (1974, 1978, and 1982) Argentina numbered the team alphabetically by surname

THE 12TH PLAYER IN SOCCER

In SOCCER, the fans are dubbed the 12th player because their support is equal to having an additional player on the field. Some football clubs that received strong support from fans, retire the number 12 jersey to honor them.

Thus, Fenerbahce, RC Lens, Bayern Munich, Feyenoord, Portsmouth, Dynamo Kiev, Lazio or Zenith St. Petersburg are some of the clubs where the number 12 has been permanently withdrawn to pay tribute to the loyalty of supporters.

SO WHAT NEXT WITH THE NUMBERS?

So player numbers have a range of significance. From allowing umpires and the supporters to easily identify players on a team to supporting a players story, the number means everything.